This stall’s been serving delicious beehoon, nasi lemak, and curry rice for 53 years, not to mention great chilli. Ring a bell? 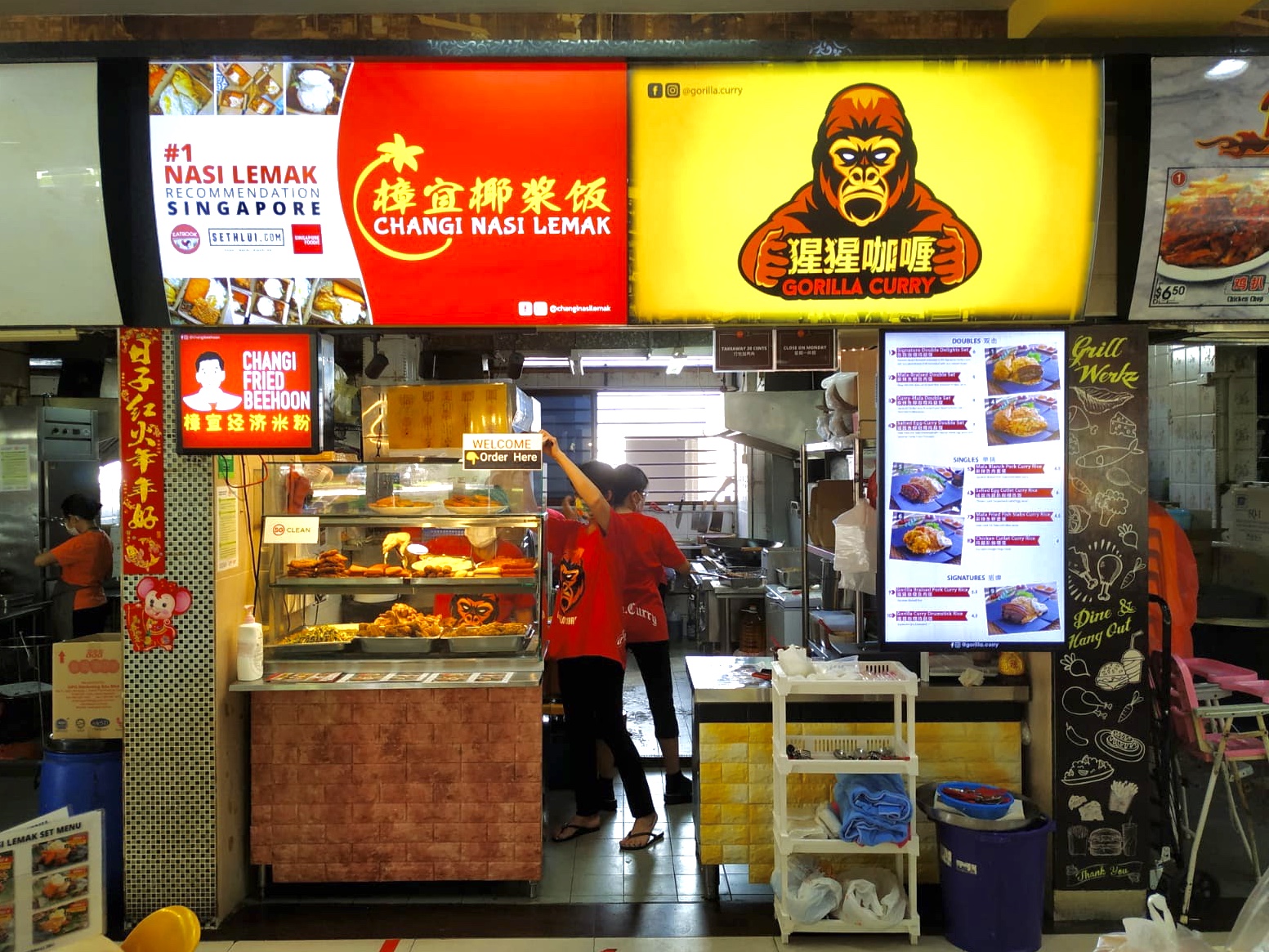 Changi Fried Beehoon – also known as Changi Nasi Lemak or Gorilla Curry – needs no introduction, although appearances can certainly be deceiving on that front. Their reputation for making one of the best chilli in Singapore has spread far and wide, and their aromatic nasi lemak and curry has made the front page of many a food blog.

That’s probably why the stall attracted a steady stream of customers despite being hidden pretty deep in the Bukit Batok neighbourhood! The queue kept up the entire time we were there, with many customers ordering five or six packets to go. 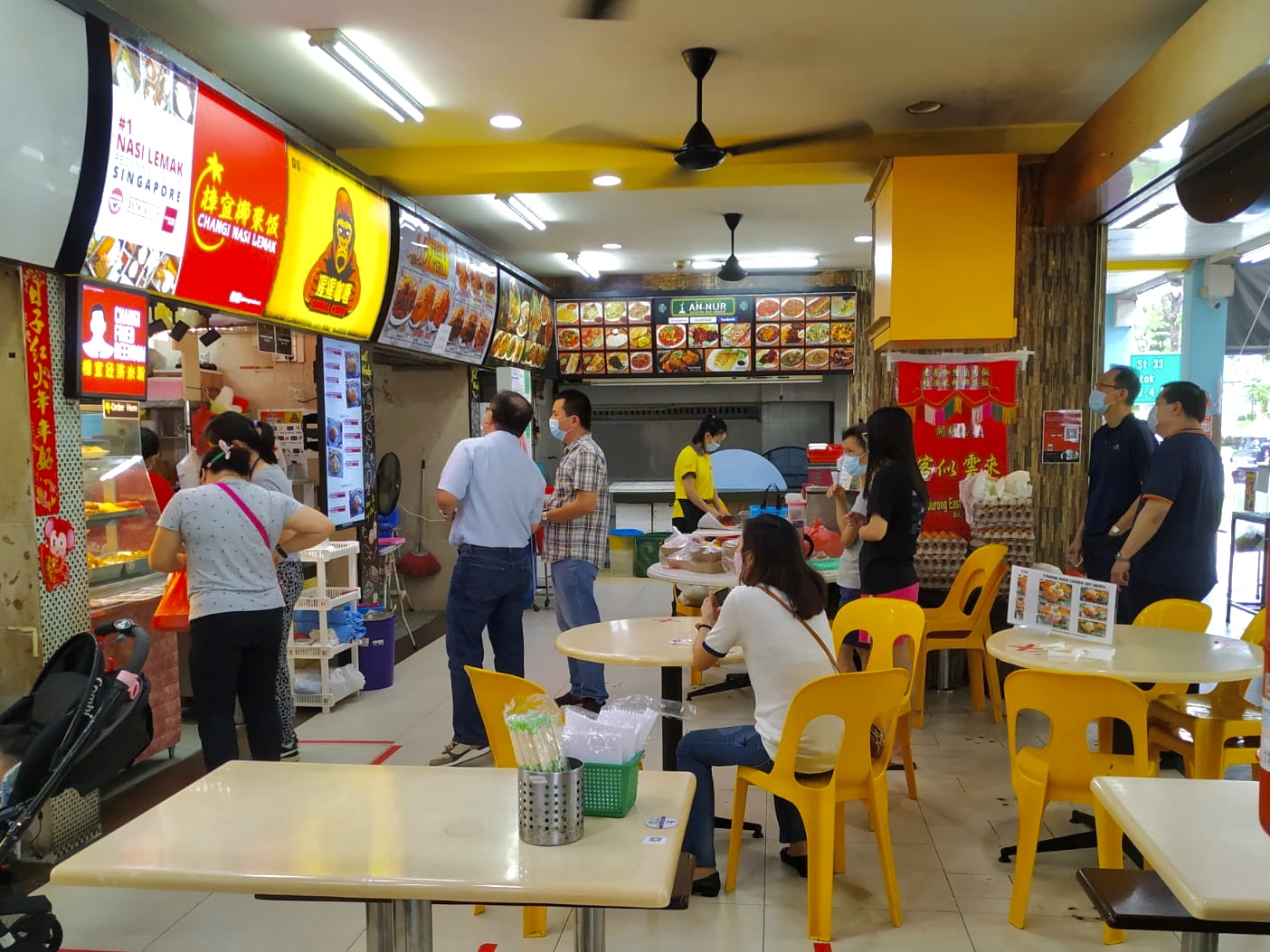 The mala craze that’s hit Singapore has hit Singapore hard. You’d be hard-pressed to find a Singaporean who isn’t a fan of the Szechuan dish and all its variations, and we at Singapore Foodie are no exception to that rule. So when we heard that Changi Fried Beehoon was serving mala beehoon, we had to give it a try.

By the time we got there, there was just one plate left of mala beehoon up for grabs – and we snagged it. (As if you needed any more proof of how popular this stall is.) 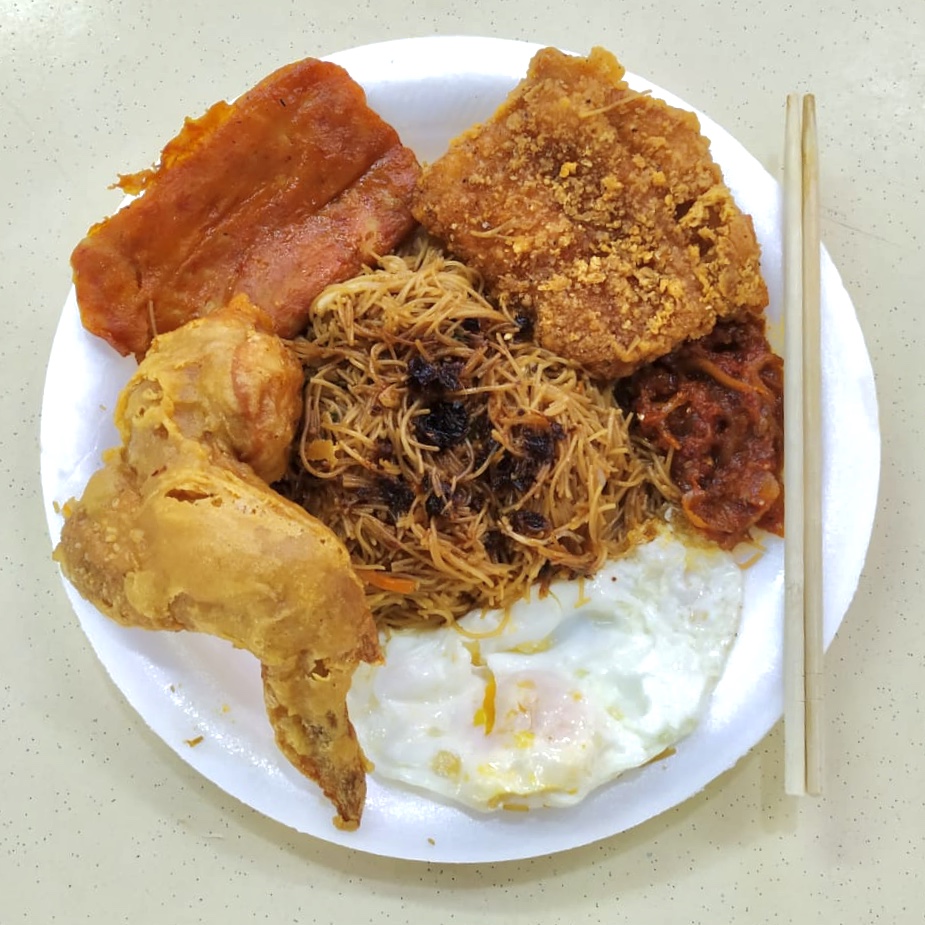 We got a few of the more popular sides to go along with the marquee beehoon, including a chicken wing, an otak, and their crowd-pleaser, the McSpicy-inspired chicken cutlet. And of course, we had a generous scoop of their famous chilli to go with it.

The beehoon itself was soft, fragrant, and bursting with mala flavour. It wasn’t too spicy, but it had enough of the tongue-numbing sensation you associate with szechuan peppercorns to make the mala flavour pretty legit. We could definitely see why it sold out so fast!

The sides were pretty amazing, too. The McSpicy-inspired chicken cutlet was crispy, thick and juicy, and it definitely tasted like McSpicy. (A little less spicy, but still, pretty good.) 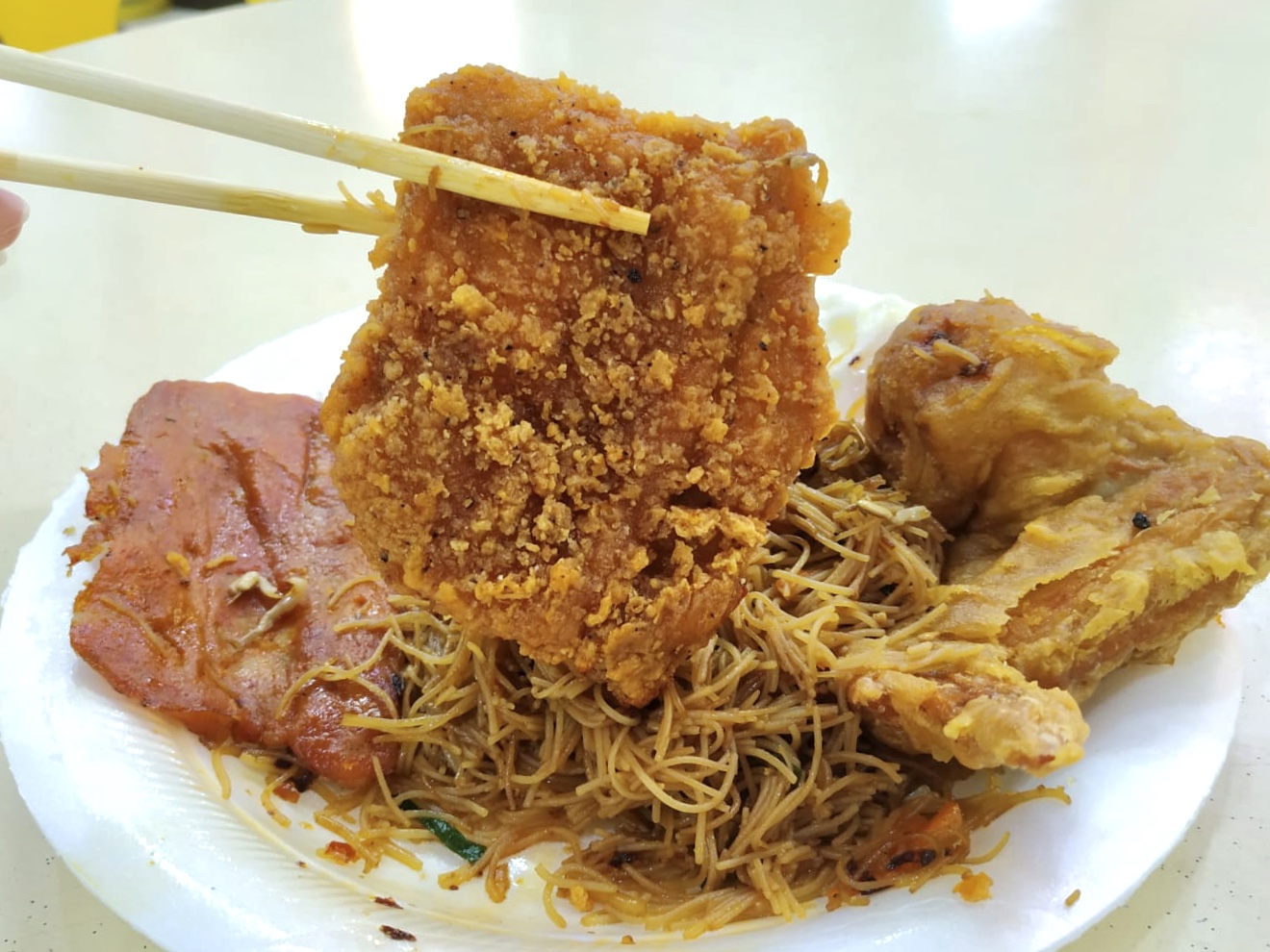 The otak had a good mouthfeel and didn’t pack much heat – good thing, since what with the mala beehoon and the McSpicy cutlet we already had a lot of spice on our plate. And the chicken wing was absolutely delicious, golden-brown on the outside and salty and succulent on the inside. 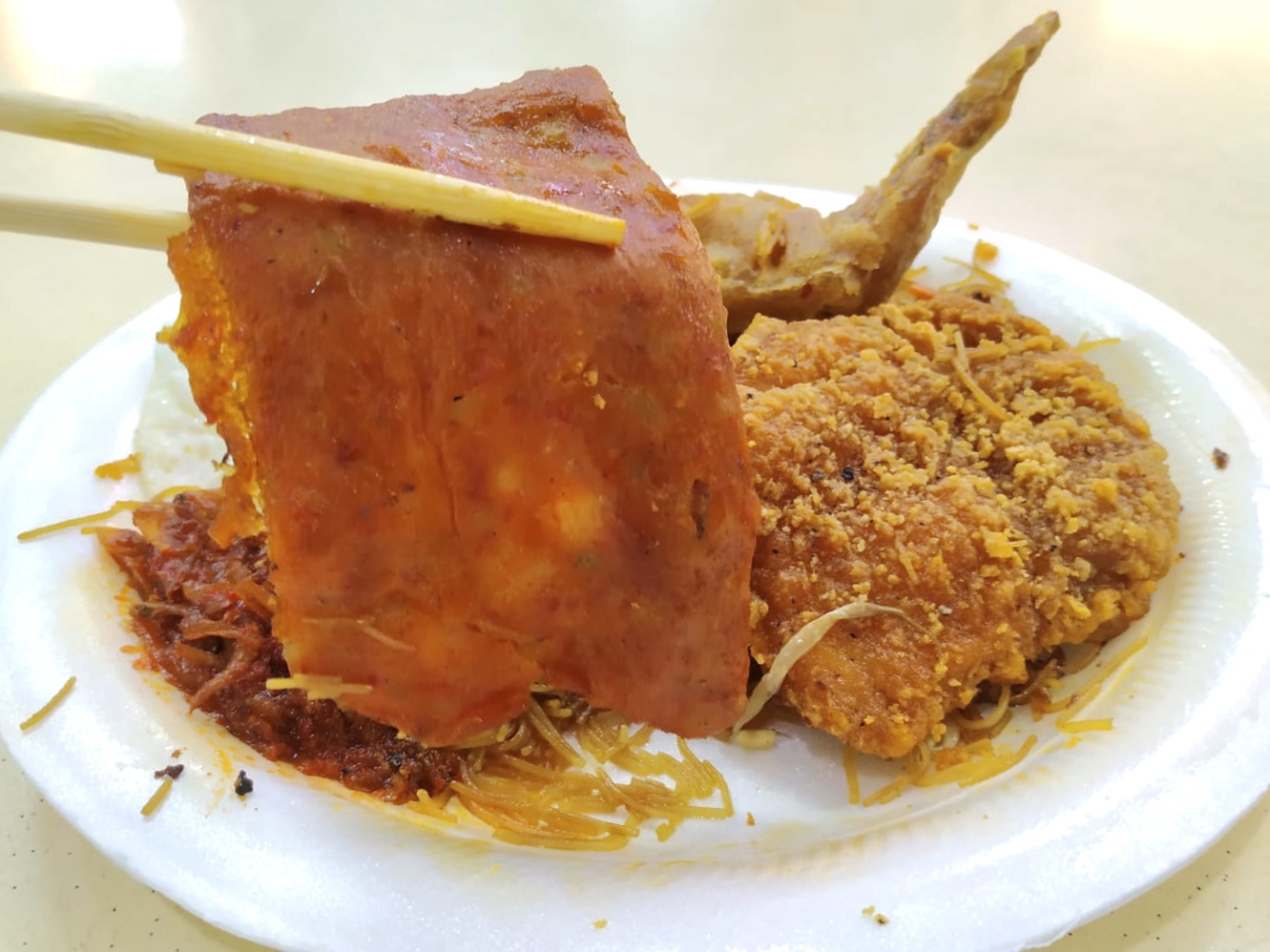 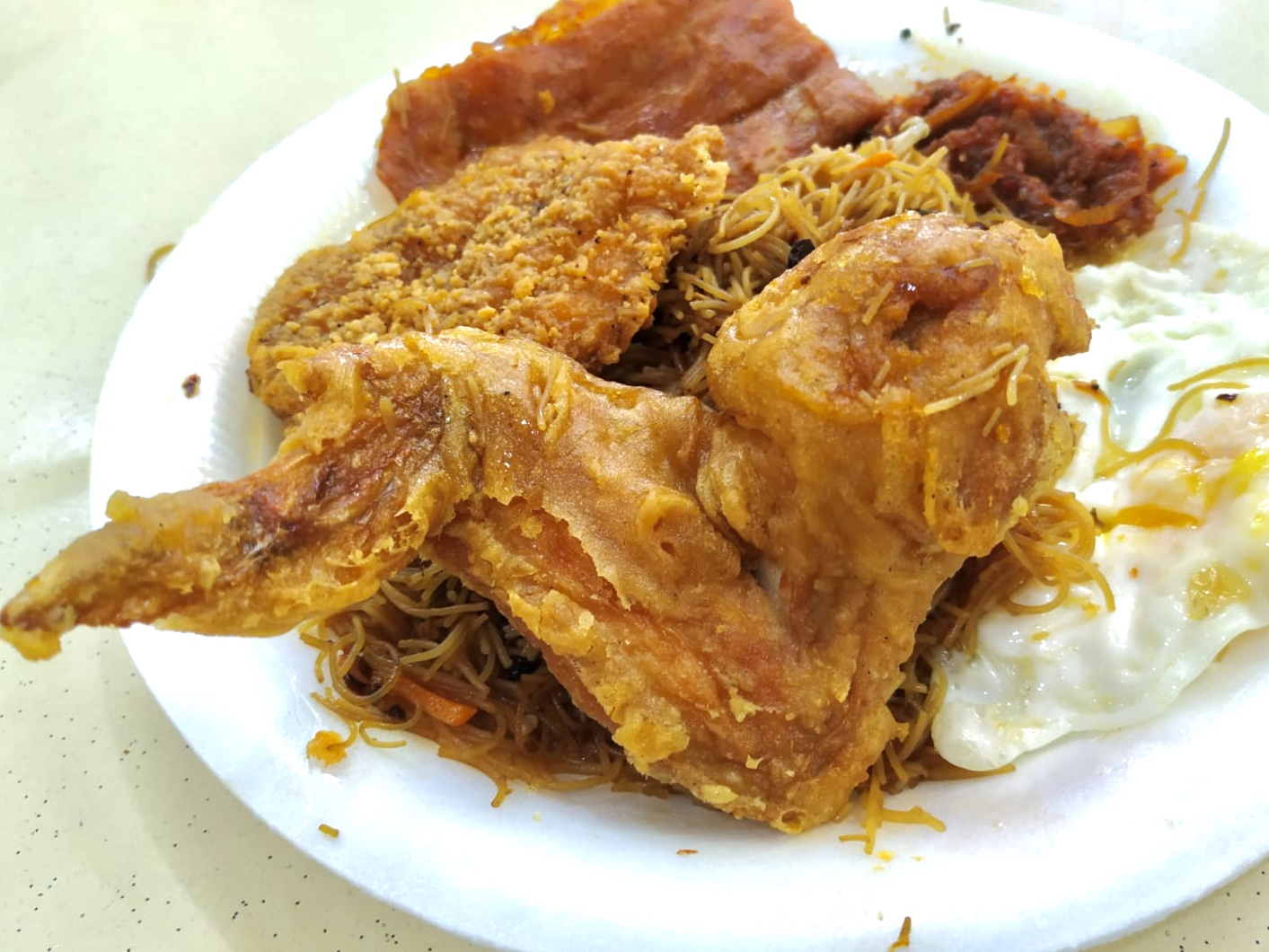 The mala beehoon isn’t the only thing worth trying, of course. The nasi lemak at this stall is absolutely delicious, and the curry rice draws queues. The most popular items here are the curry and the braised pork, which is cooked the traditional way.

And who can forget the famous chilli? 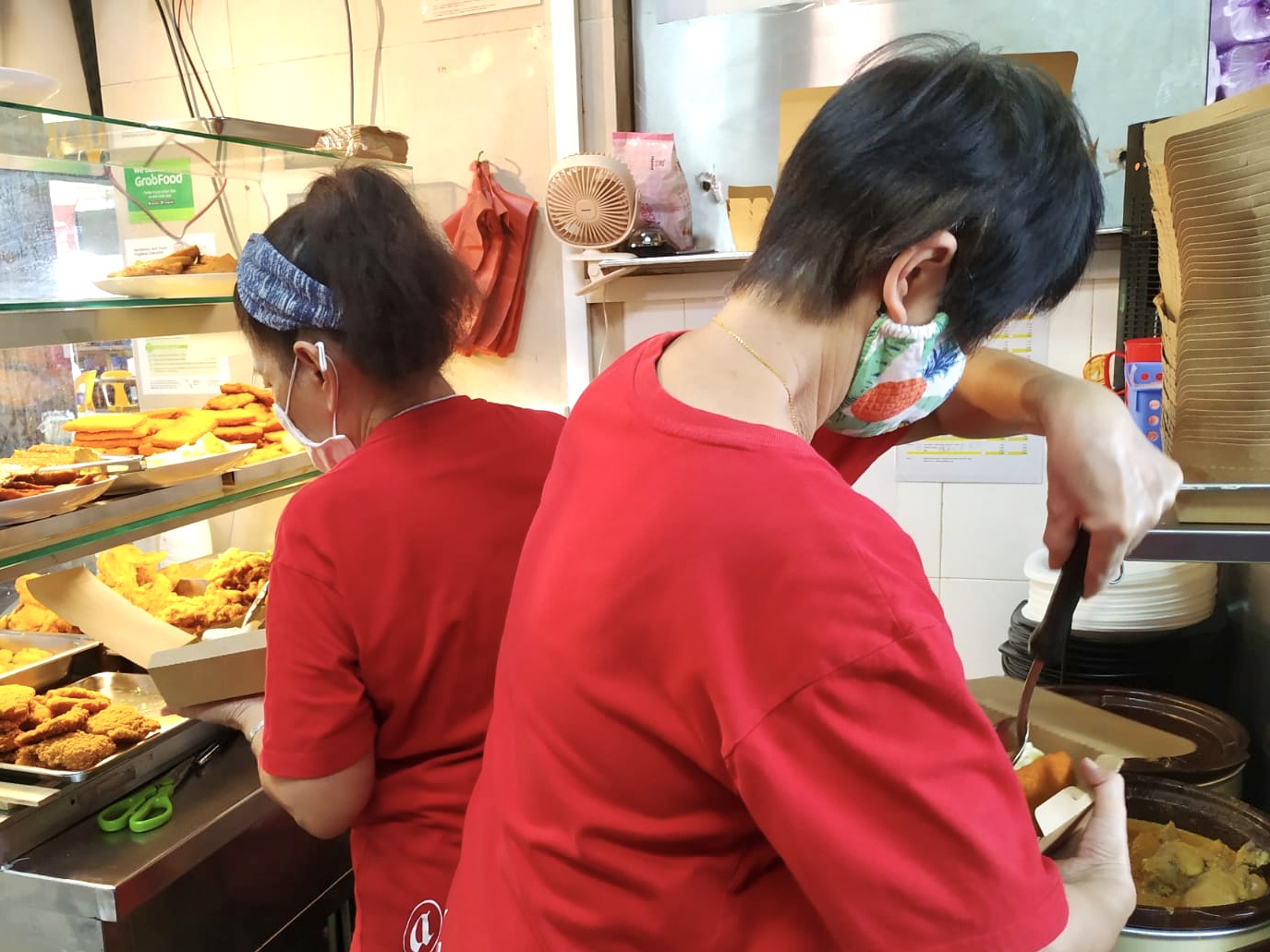 Changi Fried Beehoon is a family business that has been up and running since 1967. (Imagine that!) The current stall owner started his cooking career right after he completed his National Service, taking the place over from his uncle in 1978.

“We were at Texas Instruments Canteen in the beginning,” he explains, when we asked about the history of the stall. They’d started out with selling just nasi lemak; later on, it was chilli and beehoon and an expansion into curry rice.

All the well-known dishes prepared at this stall are made from family recipes. We were wowed to learn that Uncle had learned how to cook curry from his maternal grandmother, and that the stall’s renowned chilli recipe was taught to him by his aunt. 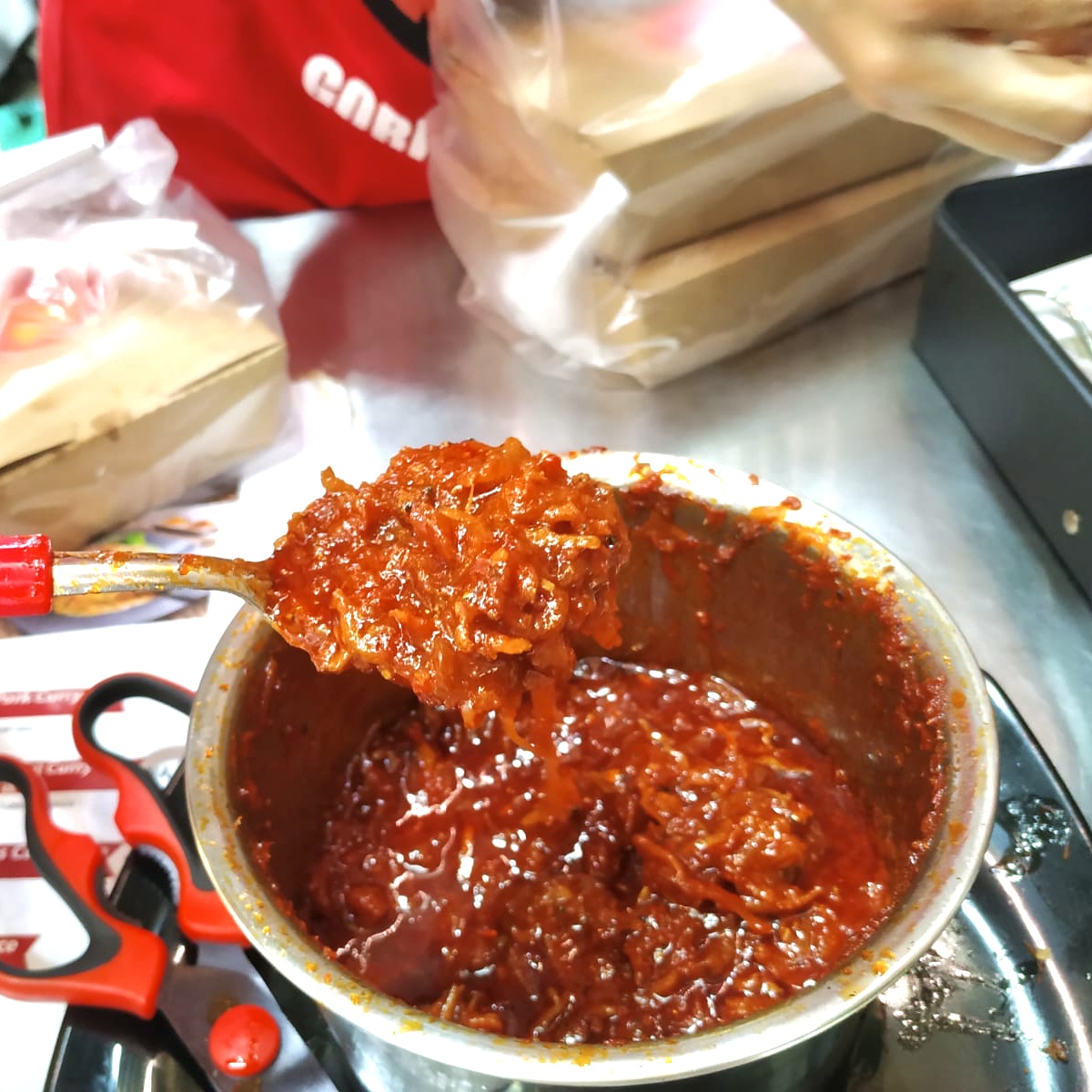 With a smile, Uncle also explained that he learned the newer recipes, such as the mala beehoon, later on.

“My son is always showing me new things to try to cook,” he said in rapid Mandarin, laughing.

With the stall owner’s friendly attitude and the delicious food, it’s no wonder people come back again and again. We were told that hungry customers start lining up at around 7am. We’re not even awake then.

The early crowds mean that the family has to wake up as early as 4am to start their preparations for the day, but there are no complaints, only sincere effort and diligence in cooking the food. We watched as Uncle prepared more food, dipping each chicken wing carefully into the oil. 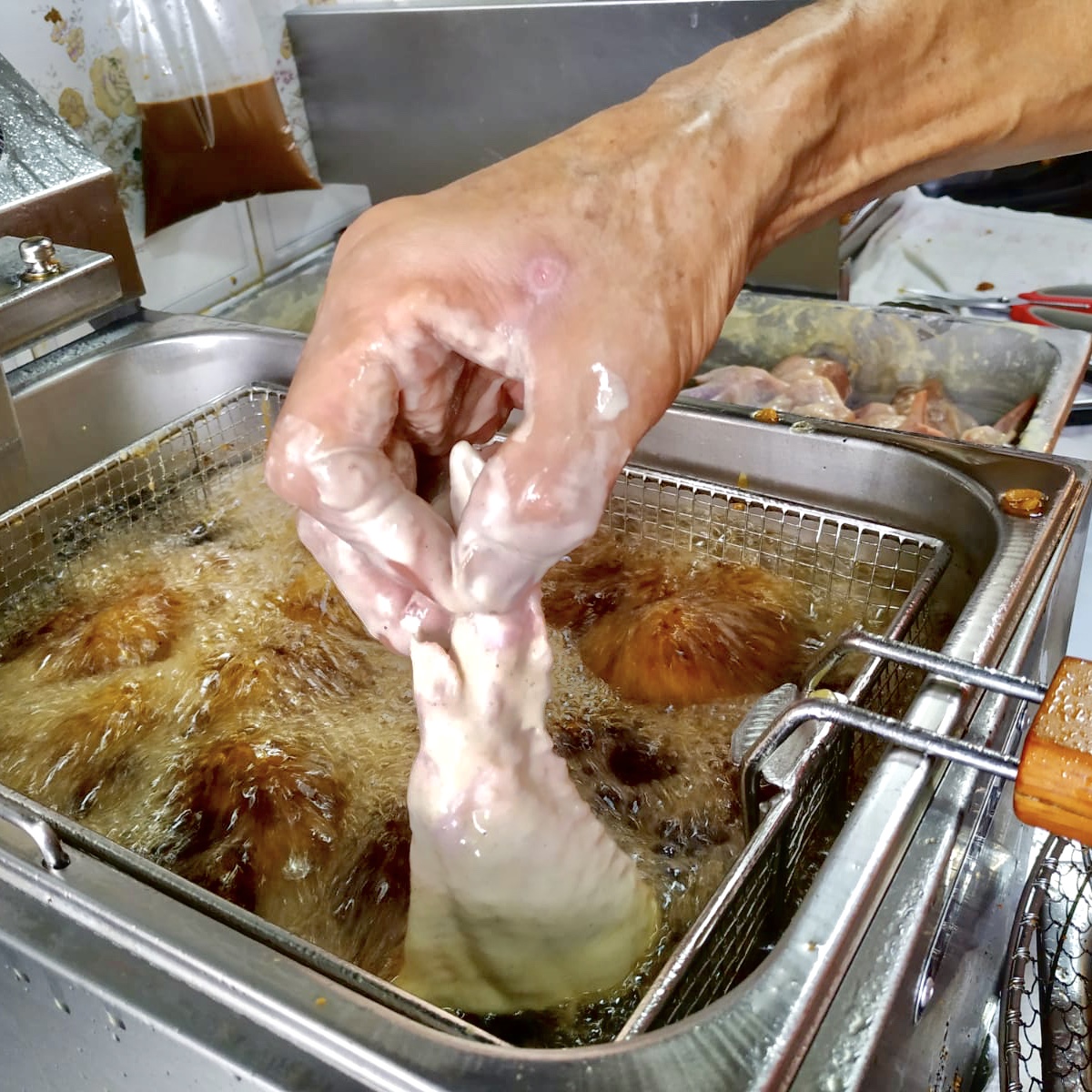 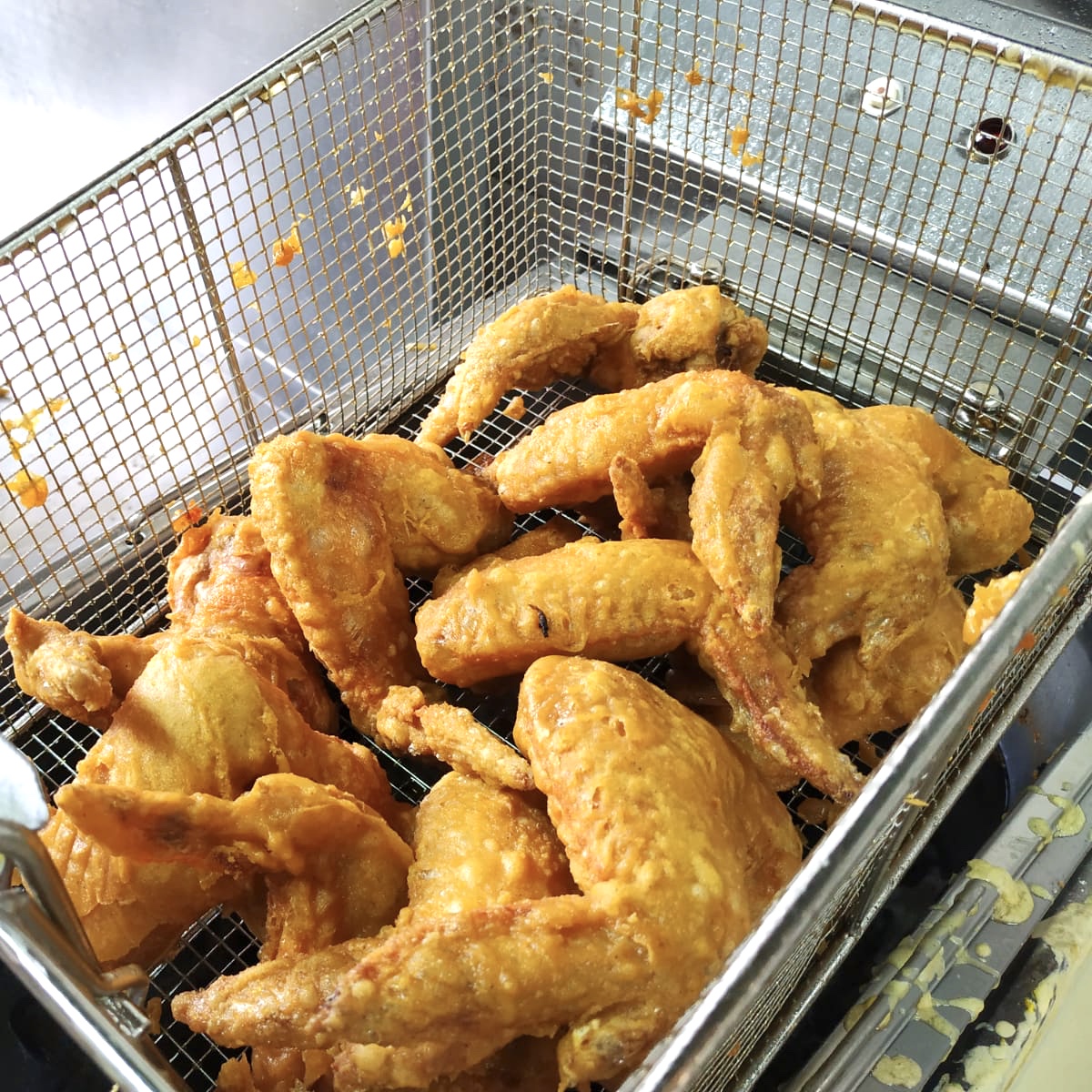 It’s no wonder this stall is so popular.

We left the stall with full stomachs and full hearts. The next time you’re craving beehoon, nasi lemak, or curry rice, we recommend you come down to Changi Fried Beehoon for great food – and even better service.